Patrick and I have some exciting news…we’re having a baby!

We first found out the exciting news on August 24th, 2012. I had a sneaking suspicion that I may be pregnant, so I took a test and sure enough, my gut feeling was spot on! I felt joy, I felt pure happiness, I felt scared, and I felt fearful all rolled into one. I had been praying for this moment for SO long and I hoped it wasn’t too good to be true.
I didn’t tell Patrick in any cute thoughtful way, I just came out with it and held up the evidence of the test. Even though it wasn’t a perfectly planned moment, it was a perfect moment in such a special time in our lives 🙂

I mentioned previously that I was scared and fearful…I don’t want you to get the wrong idea…we were and are SO ready for parenthood (or so we think!). I felt those emotions because I suffered a miscarriage a few months prior, and I feared I would endure that same pain again, which is heart wrenching and just indescribable. I don’t want to take away from the joyous occasion at hand, but I wanted to mention it a.) to let anyone reading who may have had or may have a miscarriage in the future…you aren’t alone! I don’t know why women don’t talk about it. I find that when I’m more vocal about it, more and more women admit that they’ve also had miscarriages. It’s sadly quite common. I also wanted to mention it for b.) if you ever need to talk about it, I’m here for you…nobody understands unless they’ve also endured it. I wish I had known someone who had been there who I could turn to in that moment.
So, we conceived during training camp. I would have NEVER in a million years guessed that would be the time we would finally be blessed with a little one! In fact, I had no faith whatsoever. I was at my lowest point in my whole pregnancy journey. In July, I had found out once again that I would not be a mother. In addition, for three days in a row, I found out three different close friends here in Nashville would be mothers. I was so happy for my friends, I truly was, but I was also so mad that I wasn’t one of them and questioned why I wasn’t one of them. I remember telling Patrick in a hissyfit “Great, no baby in July, August is obviously a bust because of camp, so that pushes us to September…and who knows if it will even happen then?!”…”Oh ye of little faith”…that was totally me! God knows…
I had a few pregnancy signs…some may make you laugh 🙂
1.) I had a huge breakdown while Patrick was at camp when I attempted to cut the grass! I cut it at too low of a setting and there were clumps of grass all over the yard. I got the tractor stuck in one of the giant piles of grass and had to literally dig it out. I also got it stuck in two separate ditches on our property. I remember calling Patrick bawling my eyes out saying I wasn’t made to cut grass and I would never ever do it again! It really wasn’t that big of a deal, but I was an emotional train wreck. When I finally calmed down I felt terribly stupid for my outburst and actually drove out to see him and apologize saying “I don’t know what got into me!” He suspected PMS, while I suggested a pregnancy…he told me to not get my hopes up!
2.) I experienced attachment bleeding…just a light pink discharge mid-cycle, after ovulation. They say only a third of women experience this. I didn’t know what it was until I googled “spotting after ovulation” and low and behold I discovered attachment or implantation bleeding. I didn’t want to get my hopes up, but this was when I got my gut feeling that just wouldn’t go away!
3.) I bought fresh flowers and forgot to change out the water…I literally woke up in the middle of the night from the smell and had to throw the flowers away! They weren’t even dead, and they weren’t even in my bedroom, but they had to be disposed of! I couldn’t stand the smell!
4.) I got really angry when a restaurant told me they closed early for the evening and wouldn’t seat us for dinner…like really angry! Momma (who didn’t know she was yet a Momma!) was hungry and wanted some food pronto! That was really uncharacteristic of me and actually had my sister questioning if I was indeed pregnant!
5.) I was at a new workout place and I got my butt kicked. I kept wondering why I couldn’t keep up…now I know why! Thankfully I wasn’t so terribly out of shape, just exhausted from everything else going on internally!
Exhaustion really set in after I found out I was indeed pregnant. I couldn’t get enough sleep! I’d take a 3 hour nap during the day and go to bed at 8pm and sleep until 8am…and I still had no energy to do anything! My Monday cleaning routine turned into a Monday, Tuesday and Wednesday cleaning routine…I just couldn’t do it all at once anymore! I’m still lagging a bit, but I’m getting a lot better in the energy department! Food is also sitting better in my stomach. I thankfully never experienced morning sickness, but there were many times I felt sick to my stomach and just had no release. I don’t know which is worse!
Because of our previous miscarriage and some other health issues, my pregnancy is considered “high-risk”. Basically I have to go to the doctors more than a regular pregnant women…I choose to look at the positives of that…I get more ultrasounds, so I get to see our baby more often!
SEVEN WEEKS

It looks like a little grain of rice! But we got to hear the heartbeat for the first time…what an amazing sound!
EIGHT WEEKS

I had an emergency ultrasound because of some breakthrough bleeding…thankfully everything was okay! The doctor just told me I’m probably pushing myself too much…I felt like all I was doing was sleeping!
NINE WEEKS 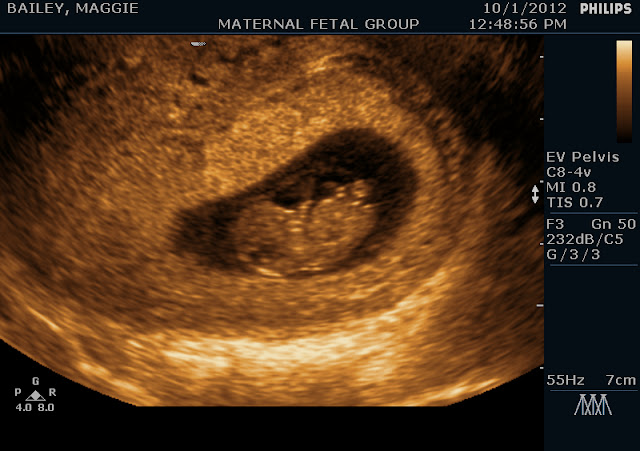 We got a picture and a video! I could really see the baby moving around at this appointment! You can also clearly make out the head, hands and feet! Getting so big so fast! 🙂
ELEVEN WEEKS

Our little one is officially 2 inches long now! PS That is not a giant nose growing on our babe, it’s just its little hand reaching up to say hello to you 🙂

When we were at the 11-week mark and felt comfortable enough to share our good news 🙂 We still know anything can happen, that’s why prayers are always so necessary! Now that you know, you can keep our little one in your prayers 🙂 We decided to have a Halloween party to help reveal our news! We figured it was a fun, festive idea that would be memorable to mark this special time. We decided to do a little play on Patrick’s profession…I was a football player, while he was a referee…he flagged me for “holding”…a baby in my belly!

I don’t think anyone was expecting that twist! It was so loud from all the cheers…it made me a little weepy eyed! Our little one is already so loved! We took advantage of the photo op…!

And our due date…

We feel so fortunate and blessed to be at this point in our lives…God is truly so good! We had been praying so hard for this special blessing for months before our wish was finally granted. It didn’t happen quickly, and it didn’t happen without some bumps in the road, but it happened and that is all that matters! Everything happens for a reason, and I have faith that God always knew what He was doing all along. Looking back now, all the hard times have made these moments now that much sweeter for us!
We love our little one so much already…can’t wait to meet him or her in 6 excruciatingly long but short months! 🙂
Facebook Comments

Keep Up With The Bailey’s!

We are always up to something interesting!

What We’ve Been Up To!